After some 10 days of frustration, due to a combination of bad weather and illness, it was something of a relief to get out and get CES session 4 done today. With the weather looking decidedly unsettled for the next week, I knew that if we didn’t get it done today we might fail to carry it out at all. This is our fifth year of running the CES at Lower Moor Farm and I would be loathe to have to miss out one of the sessions. Fortunately, Sunday was scheduled to be dry and relatively calm and, apart from a few spots of rain at about 11:00 we had a clear morning.

I was on site for 4:00, joined by David at 4:30 and Ellie, who has been away, joined us a little later.  A little later in the morning we were joined by Abi Stayte, doing work experience at the Trust, and Rich Moore, a volunteer leader for the Trust who is looking at organising surveys and activities at the Trust’s newly acquired site: Morningside Farm.

The session started quite calmly, with 10 birds in the first round and each subsequent round was similar until about 10:00, when we caught a couple of tit flocks: primarily Blue and Long-tailed Tits.  That was a brief busy period.  It then settled down for another hour, until a couple of family groups of Great Tit turned up.

Prior to the session I did have concerns about whether the bad weather of the last few days would have adversely affected the catch, particularly the number of fledglings in the catch.  Fortunately, fledglings were the main part of the catch. We had young from the aforementioned Blue and Great Tits, plus our first juvenile Long-tailed Tits of the year. In addition we had a good number of Blackcaps, some very young Garden Warblers, plus Wrens, Robins, Dunnock and (my personal favourite of the morning) a very young Reed Bunting: 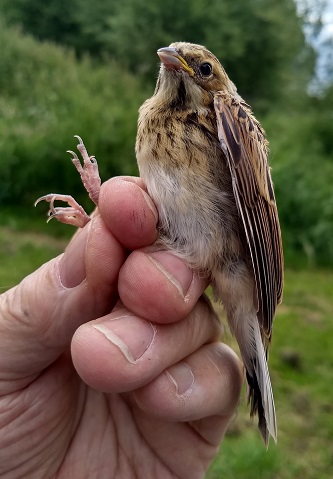 The gape is still very obvious.

*Having checked the figures, Sunday’s session was the largest CES catch we have had at Lower Moor Farm.  What is pleasing about this is that the other 100+ catches (5 of them) were all in August, when local birds are augmented by birds on passage.